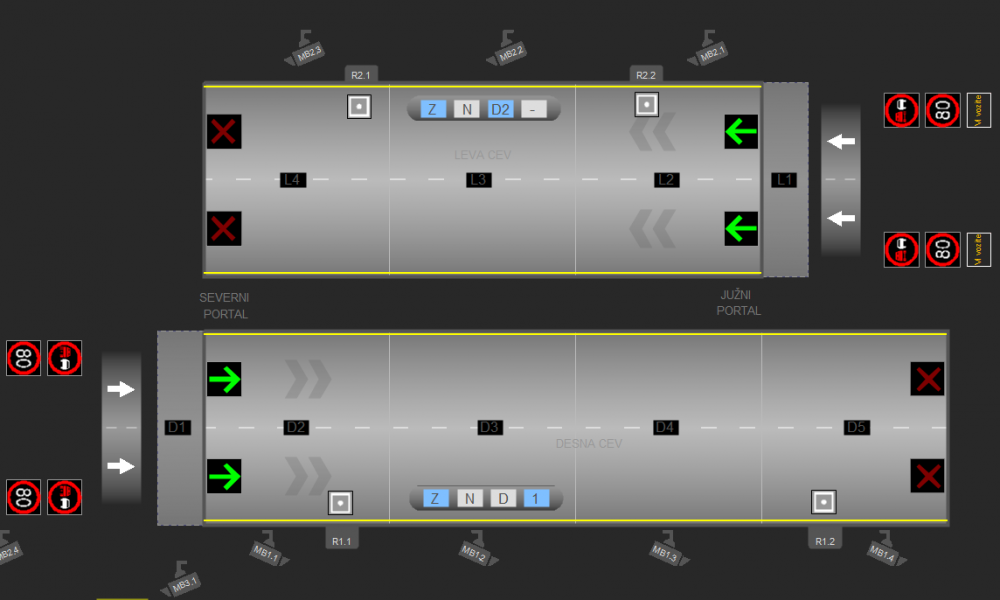 The double tube, two lane tunnel lies in the city centre on H2 motorway in Maribor. Length of each tube is 248m, one of them being prolonged for another 90 metres.

During the renovation of electro-mechanical equipment we implemented ASIST's own Tunnel Control and Supervision System, consisting both of hardware and software, SCADA graphic interface system, server and workstations.

Connection of all (sub)systems and devices into SCADA system allows operators full control over tunnel equipment, such as:

Local stations automatically regulate the lighting inside the tunnel, depending on outside illumination measured by photometers.

All system and communication equipment is carefully monitored using SNMP protocol. In such way we can quickly detect any possible issues in integrated equipment.

A semantic approach, scenario based SCADA (graphical interface) is used for tunnel control. It is easy to use and provides very fast response to events on the road. Operators can control the tunnel based on predefined scenarios. (Or the tunnel equipment on their own if necessary.)

A number of automatic algorithms were implemented for improved traffic safety, including automatic tunnel closure in case of wrong way vehicle or fire alarm, and warning in case of stopped vehicle, main voltage blackout, lighting failure or magnetic door opening.

The Tunnel Control and Supervision System for Greenwich Maribor Cut & Cover tunnel was developed and pre-tested in Asist's testing facility, prior to implementing it on the location. Located in the city centre of Maribor, it was installed, field-checked and put into operation in only four days for minimal traffic disruption, thanks to our experienced team.